This morning I took a walk through my family’s woods in central Ohio. One of the first things that I noticed was that in some places the ground had heaved up on pillars of ice. In some places, mossy patches had split apart to reveal many ice needles sticking up off of the soil about four or five centimeters. In others, moss or leaves rested on top of the frost columns. 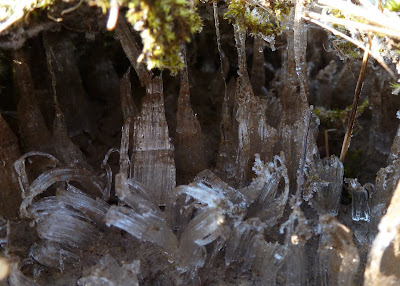 'These ice needles, or frost columns, form when soil is damp and above freezing but the surface temperature drops below freezing. In Ohio, we have had a relatively warm winter, and lots of rain through November and December. The woods are very wet—I’ve been wearing rubber muck boots instead of hiking boots for fear of sinking. Last night the temperature got down to 24˚F. In these conditions, the liquid water in the ground is drawn to the surface through capillary action.

Basically, the drier soil above attracts water molecules, which defy gravity and rise through the ground. When the water particles reach the surface they freeze, adding to the bottom of a thin column of ice. They can twist, join together side-by-side, or strand very straight and alone. They seem to form especially well in areas without very many roots. I’ve never seen ice needles in a lawn, but often on trails in the woods under fallen leaves or thin patches of moss. They are easy to see in muddy areas. They can even push through very densely packed soil. I have seen frost columns heave up part of the dirt floor in our barn, which seems rock-solid when I’ve tried to dig parts of it up. 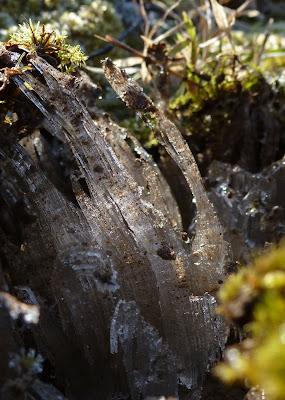 At any rate, ice needles are a beautiful phenomenon and make it well worth being outside in the cold even when there is no snow.