All flights from Santiago to Puerto Montt were cancelled because of volcanic ash and because this is a holiday weekend (no idea which one, and certainly a biweekly occurance if Chile is like Argentina or Peru), all the busses were full. So I am stranded in Santiago for a couple days before a nice relaxing 12 hour bus trip to Puerto Montt. 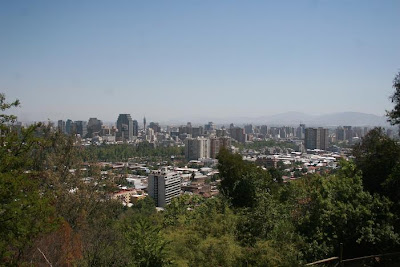 So I happened into the zoo, which was, quite surprisingly fairly respectable and really heavy on the birds - but fairly nonexistant for insects (though there were butterflies flying in the zoo). They had a small, but diverse, exhibit of waterfowl. I'll buy whomever can name all the species pictured below first a beer - I'll even give you the number of species in the photo to make it a little less difficult. If you get the last, the bonus - and the easiest - I'll even buy you something better than a bud lite.

Posted by Eric LoPresti at 2:42 PM No comments:

Tomorrow (Oct-25) I am setting out for Chiloe Island, Chile, a very large island in northern Patagonia with great temperate rainforest - or so I hear. I am continuing working for the Golondrinas de las Americas project, the same project that sent me to Peru, the Bahamas and Argentina last year. I'll be studying the breeding biology of the Chilean Swallow (Tachycineta meyeni), a southern South American equivalent of the Tree Swallow.


I first met this species in Ushuaia last year where I spent about a month studying the swallows and taking Spanish classes. I also met the second bird that will be a big part of my time in Chiloe: the Thorn-tailed Rayadito.

Another cavity-nester that uses bird boxes, this little Furnariid fills almost the same niche as chickadees or kinglets do in North America. Despite weighing almost nothing and being just slightly larger than a golfball, these guys will harass you if you stray too close to their nests. I'll be studying the swallows in the boxes on Chiloe while a group of Chilean students study the Rayaditos nesting in the same set of boxes.


Tierra del Fuego was by far the most striking place I have ever been. Mountains rose straight from the water and then fell into other mountains. Glaciers towered over the land in inaccessible, unnamed valleys and beautiful peat bogs in any depression. I expect Chiloe to be equally striking but not quite as inhospitable, despite Darwin's assertion that it may be the rainiest place on earth.
Posted by Eric LoPresti at 3:06 PM 1 comment:

I worked on various things all morning, then headed out a little after noon, expecting to see little given the time and the winds. I think that checking these areas early in the morning would result in far more birds.

At the Bill Rice complex, in about an hour of walking around, I found the highest number of meadowlarks I have ever seen in eastern MA. At least 10, but easily could have been double that number.


Additionally, there were at least 60 Savannah Sparrows with assorted other birds, including this really gray female Ring-necked Pheasant.

I moved on to the compost facility where I found the best bird of the day, a Lincoln's Sparrow, amidst a large group of sparrows. I saw it on two separate occasions, so it may have been two birds. The compost people just turned over many of the piles and opened up the wetland, so I expect even more birds in the coming days.
For the first time ever, I got kicked out of this spot - apparently they do not like birders there when heavy equipment is in use. The guy was nice and basically just said he wouldn't want any injuries. I still plan on birding there in off hours as it is a great spot.

The model airplane fields had no Rusty Blackbirds - yet - and barely anything at all, though the Field Sparrow pictured above was feeding with a Savannah Sparrow on the edge of the parking lot. I then hit Lake Pearl and saw a huge raft of coot - 160+ - and a few Pied-billed Grebes, but all were distant.

Besides the birds, there was some insect activity. For butterflies, only a single monarch and a handful of Orange Sulphurs were out, whereas many Autumn Meadowhawks (Sympetrum vicinum), a couple Anax junius and a single Pantala flavescens were the dragonflies flying. Also present were many grasshoppers (mostly spur-throats, Melanoplus spp.) and a couple European Mantids.


Back to work!
Posted by Eric LoPresti at 1:30 PM No comments:

Common Buckeyes: keep your eyes out

Jimmy Tarrant and I were fishing about a week ago in Narragansett, RI, and while we didn't catch any fish, we did notice loads of butterflies coming in off the ocean. All in all, I probably saw about 20 Common Buckeyes moving northward (in contrast to the Monarchs hugging the coast going west). Apparently, it has been a great year for them in the mid-Atlantic and some may move north instead of south. There have been loads around in coastal areas and they can survive cold weather a bit better than most other butterflies, so keep your eyes out.

Posted by Eric LoPresti at 6:35 AM No comments:

There exists an interesting, if relatively unknown, group of beetles that are common in the environment and very rarely seen that serve a much-needed function and go about it in a cool way.

These beetles members of the carrion beetle family (Sirphidae) and are unique in that they bury the carcass of whatever animal they plan to use and lay their eggs in it. The parents work together to dig out all the dirt from underneath a dead animal, say a mouse or a small bird, and then prepare the carcass by removing all feathers or hair and covering it in oral and anal secretions that keep the carcass fresh for longer (see: http://www.bbc.co.uk/news/science-environment-14669012). Both parents then care for the larvae for a couple weeks until they grow enough to pupate. Because of this "gravedigging" behavior the genus, Nicrophorus, is also known as the sexton beetles, as a sexton is a somewhat antiquated term for gravedigger.

We have a bunch of species of Nicrophorus in the northeast and unless you really go looking, they can be difficult to find. The easiest - while a bit gross - way to search is to by setting baited (rotten meat) pitfall traps and checking them daily for beetles. Before I delve into an interesting story, here is a pictorial guide to the species you might encounter.
Before we get on to the last two species (the two least common), it should be pointed out that the tomentosus above has a cool trick up its sleeve. The underside of the elytra is bright yellow, as is the upperside of the abdomen and it simply throws its wings and middle legs up and buzzes around during the day, looking convincingly like a bumblebee - an animal that many predators avoid!


The next beetle I have never encountered, but trapping in New Hampshire, my good friend and fellow bug nut (direct to him all mite questions), Will Cioffi caught this species, N. defodiens.

And the last species demands a full story and many pictures as it is the one "famous" beetle of the genus: the American burying beetle, N. americanus. The largest species in the genus, reaching almost 2" and 3 grams at times, the American burying beetle historically ranged throughout the entire eastern United States in every state from Maine to Florida and out to Texas and Nebraska in the west. However, the beetle has all but become extinct in the last 100 years and is now one of the only beetles (one of the only non-butterfly insects) on the endangered species list. A natural population persists on Block Island, RI and another in small parts of Texas/Oklahoma/Nebraska.

Because of its rarity and the success Lou Perrotti at the Roger Williams Park Zoo and others elsewhere have had in breeding the species in captivity, several reintroduction efforts are now underway - though we still do not know exactly what pushed this species off.

Was it widespread pesticides? The loss of the Passenger Pigeon and Heath Hen as suitable food? Can they not deal with development? Interestingly, a new paper shows that Opossums eat these guys preferentially over carrion and they are a species that has exploded and massively expanded their range in the past 100 years - and there are no opposums on Block Island and coyotes keep them in check out west. Unfortunately, all of these post-hoc hypotheses are just that, and we will never know for sure the reason for the decline.

I got to work on this reintroduction effort this past summer on Nantucket with the Maria Mitchell Association and Roger Williams Park Zoo and I really felt it as a worthwhile and hopefully successful venture. While the government is spending millions of dollars on reintroducing Black-footed Ferrets, California Condors and Aplomado Falcons - this project probably costs less than $10,000 a year and has shown some preliminary success. The population grew steadily from the first introduction in 1994 until this past year when help - in the form of carrion - was cut off from the population in order to figure out whether the beetles could reproduce on their own. We found a low level of natural reproduction occurring, a very good sign. Overall, there are many interesting insect reintroduction and conservation projects occurring that simply do not get the press that the big animals do. There is a cool one occurring now to reintroduce an extremely rare (but once abundant) tiger beetle to Monomoy NWR on the Cape, though it is still only a few years in - I will be following it closely.
Posted by Eric LoPresti at 6:26 AM 9 comments:

Because I am up at Cornell for a few days, just a quick older story of a duck: 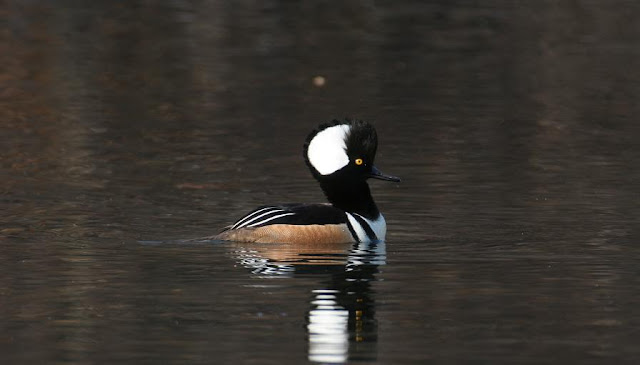 A couple springs ago, Jimmy and I stumbled across this beautiful male Hooded Merganser strutting around a pond in Providence, despite the complete absence of any females of his species. However, he was not alone.

He spent hours over the days that we birded the area wooing this (or maybe a couple) female mallard. She took no interest in him whatsoever, including going so far as to bite him to drive him away. However he kept at it, running little circles around her with his crest up and driving away any male mallards that deigned to venture too close to her. 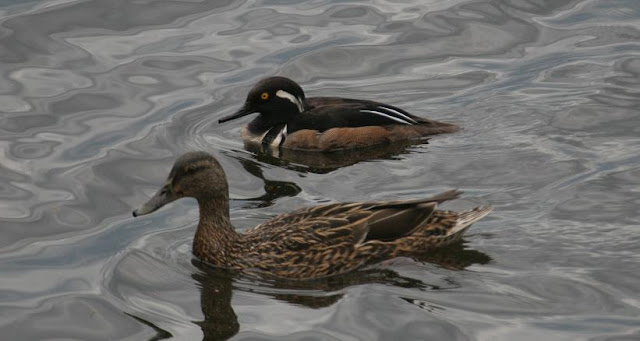 Try as he might, there were no odd ducklings produced that summer, however he stuck around long after all other hoodies had left the area for their breeding grounds (small freshwater ponds - they breed in cavities). Whatever happened to him and why he was so attached to a mallard remain open questions.

And on the topic of ducks, the first teal have shown up in MA/RI, as have the first widgeon, grebes and more. Keep your eyes on your local ponds!
Posted by Eric LoPresti at 8:02 PM No comments: