I've been spending as much time in the field (at McLaughlin reserve, which I can't say enough good stuff about) as I can manage lately - trying to complete all the projects I've begun. A quick update on some interesting stuff.

The exudates of Trichostema laxum - also known as turpentineweed or bluecurls - are rather strange smelling (like herbaceous vinegar) and seem to be very deterrent to herbivorous insects in lab trials. So I have a large scale exudate removal experiment going, that while taking up a huge amount of time, seems to be going really well.

I am seeing an increase in herbivory (haven't crunched the numbers, but it is noticeable) in the exudate-removed plants, and hopefully, I'll be able to show a fitness effect. However, I wanted to be able to say that any fitness effect was due to herbivory, not differential pollination. So I've been spending 6 or so hours a day watching pollinators visit these plants. Which is also going well, but sitting for that long in the heat is driving me crazy. So I've been taking breaks and visiting other populations of T. laxum to look for herbivory.

While scouting populations, I've come across some flower polymorphisms that apparently haven't been described for the species. They occur in low frequency (1:1,000-100,000 depending on the population), but occur nonetheless, and therefore, are interesting. Are they selected against heavily? Or with big populations, are they just swamped out as neutral? 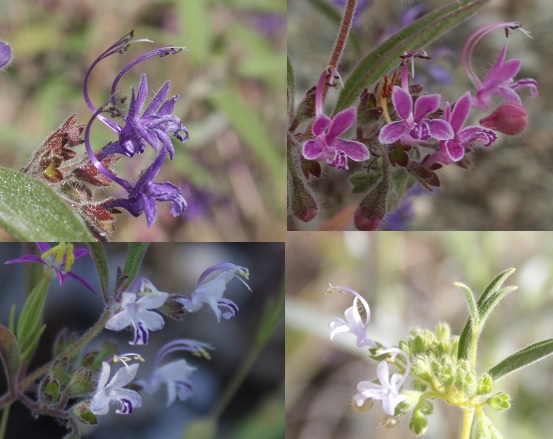 The top left is the "normal" morph - a purple flower which varies a small amount in shade, but not too much. The pink morph is in at least two populations in low frequency and probably exhibits a different molecular structure of anthocyanin - the pigment that gives most plants a reddish or pinkish color. The bottom right plant lacks anthocyanin entirely, it has no reddish parts, including the stem that is reddish in all other individuals of the species. The bottom left has anthocyanin - probably the same form as the normal, and has dark reddish stems - but lacks it on the flowers except on the lower lip.

I'm not sure what to make of these, but I've been gathering fitness data (the anthocyanin-less morph seems to be sterile) and pollination data and I'll hopefully collect seed and do some breeding experiments.

Otherwise, life has been good!


Posted by Eric LoPresti at 8:39 AM No comments: