Within the genus Tachycineta, there are a number of smaller radiations: one of which was in the Caribbean and has two members now, both very much restricted. I have talked at length about the Bahama Swallow Tachycineta cyaneoviridis: see here and here), but a lesser known sister species exists on the island of Hispaniola in the countries of the Dominican Republic and Haiti. Inhabiting low mountain ranges, this species may have a more secure population than the Bahama Swallow, but maybe not: the subspecies in Puerto Rico is now extinct.


A good friend of mine, Justin Proctor, is going to be in the DR doing the first systematic examination of the natural history of this handsome bird and has a blog set up that he hopes to update from the field in the coming months: The Golden Swallow . He and his girlfriend, Marisol, a wonderful Argentine girl, will be there from March - June, so keep checking it.

With this site in action, the Golondrinas de las Americas program will have nest boxes in place for every Tachycineta species, quite an achievement: as 8/9 species are using them. Now if the Bahama Swallows would only take to the boxes...


Posted by Eric LoPresti at 9:00 AM No comments:

Later today I am off to Pacora, Peru for another season studying the most interesting bird in the world: the Tumbes Swallow (Tachycineta stolzmanni) and examining the natural history of the Tumbes Region. The Tumbes ecoregion occurs in the northwest of Peru and extreme southwest of Ecuador and features dry forests dominated by Acacia and Prosopis trees and tons of endemic plants/insects/birds/etc...

I'll leave Jimmy in charge of the New England reporting and Julia is off in New Zealand, so expect some great stuff when she returns. I am not sure how readily I will be able to access the blog, but I will do my best.


Posted by Eric LoPresti at 8:16 PM No comments:

Eric and I hustled down to Trustom Pond early yesterday morning to get in some birding before he heads back down to South America. We stopped at Allie's Donuts, a Rhode Island mainstay, on the way down for some breakfast. The combination of being up early and feeling rushed to order led to the puzzling choice of a Boston Creme donut for me. I never eat cream donuts...
Anyway, on to the birds. On the way out to the Osprey Point lookout at Trustom we were ogled by some rather tame deer, passed through a few flocks of titmice, and encountered a dismembered American Coot. Somewhat disappointingly, as I was really hoping to see one, we didn't spot any Canvasback or Redhead from the lookout. We did see a flock of Aythya - the genus of diving ducks that includes Canvasback, Redhead, and Scaup - in the distance, but we were looking into the sun and couldn't pick out any good markings.
Naturally, we decided to head to the other side of the pond to get a better view. On the way there we agreed that it was now probably too late to see a Short-eared Owl, although we would be passing some fields where one had been seen hunting recently. But, if you read the title of this post you can guess that we had a nice surprise. As we were scanning the Aythya flock (full of only Greater Scaup anyway) Eric looked up and noticed that a Short-Eared was getting mobbed by three crows directly overhead! After fiddling with his lens cap Eric snapped some great pictures. 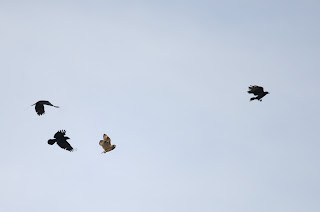 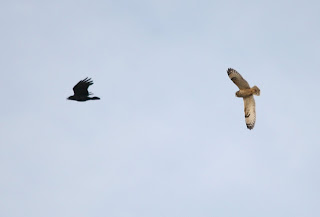 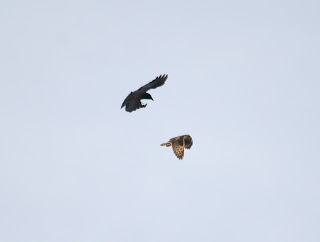 As the Short-eared usually hunts for small mammals on "low-patrol", flying just a few feet above the ground similar to a Northern Harrier, it was interesting to see one flying so high. The crows grew bored after a few minutes and the owl finally escaped and flew off to the East along the shore. 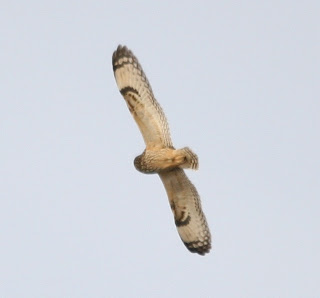 The Americas are full of cool lizards, a fact that is not quite apparent if you live in New England or other northern environs - but just about everywhere else there are some lizards around (if you look hard enough, at least). Many lizards in the Americas belong to the family Teiidae, a rather speciose group that encompasses a large variety of size and ecology.

As a student of evolution in general and ecology, the most fascinating aspect of this group that I have experienced in South America is the convergent evolution with the Varanidae of Africa and Asia. Varanids, the monitors, are very familiar lizards in that they are commonly sold (if often terrible) pets as well as true giants - the Komodo dragon is a monitor, as are several other of the world's largest lizards. They are often active predators but also scavenge carrion and one species apparently eats fruit. Convergently, several genera of Teiids fill the same ecological role in South America and, perhaps unsurprisingly, appear remarkably similar to monitors - so much so that when I saw my first Argentine Black-and-white Tegu (Tupinambis merianae) as roadkill I, embarassingly enough, tried to find which varanids were in Argentina. In Peru, I ran into a rather large and fairly uncommon species, Callopistes flavipunctatus, a few times.


I'm hoping to get a bit more time looking at these guys in Peru soon, as well as with another cool (and simply stunning) herbivorous Teiid. More later.
Posted by Eric LoPresti at 10:39 AM No comments:

Upon getting in to the states on Feb 1, I had a few hours to kill near my dad's office, so I went over to Butterfly Farm and quickly found the white red-tail and his normally colored mate. I then headed to Lonsdale marsh, where there was a stonefly hatch and remarkably a painted turtle sunning itself - the first I have ever seen in February! A huge amount of very fresh beaver damage was evident, too, in the vicinity of the old drive-in field. At CCRI Lincoln, a hardy catbird was in the thickets near the southeast corner of the parking lot and a remarkable four muskrats were out swimming around in the marshy area.

Today I checked out my local haunts and found this Pine Warbler hanging out with a flock of Eastern Bluebirds at the Wrentham compost facility. This is always a productive spot, probably because of insects and seeds in the compost, and held large flocks of Juncos and Starlings today as well.
Posted by Eric LoPresti at 10:31 AM No comments: