In order to renew my Chilean visa, I made a quick trek over to Argentina with the alternative motive of checking out a swallow box site a bit outside the city of Bariloche. On the way in, I saw what perhaps is the most memorable natural phenomenon I have ever seen... 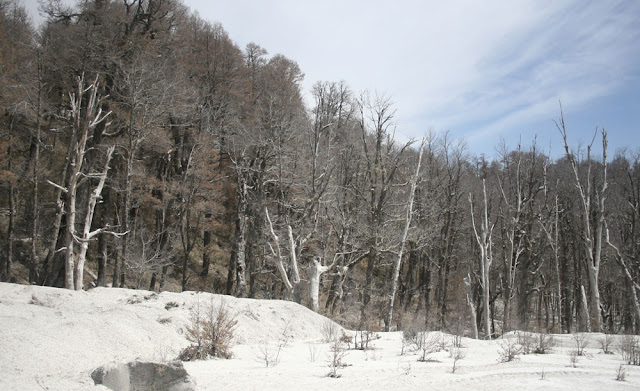 However, it was actually the eruption of the volcano Puyehue in October that caused this. Places along the route between Osorno, Chile and Bariloche, Argentina had around 6" of ash piled up. Along the sides of the road were piles where they used snowplows to move it off the road. Worse than the ash smothering all the undergrowth was that this is an evergreen forest, primarily of Nothofagus dombeyi.

I don't know if these trees are actually dead, or whether they just dropped their leaves, but I would think that 3 months later, were they alive they would be growing in new leaves (as they are evergreens). So perhaps thousands of hectares of forests died. I would love to go back in a few years and see the regrowth.

But it wasn't all doom and gloom (or the other side of the coin: a really interesting natural phenomenon). The swallow mission took me out into desert scrubland hills where I saw Black-chested Buzzard-eagles, Spectacled Tyrants, American Kestrels and some absolutely striking scenes.

Posted by Eric LoPresti at 6:19 PM