One of the most exciting animals of the temperate rainforests here is not much larger than a nickel. Rhinoderma darwinii, Darwin's Frog (la ranita de Darwin), inhabits old-growth forest floors, living in the leaf litter and wet mossy areas. There are two species in the genus though the other, R. rufum, may be extinct, as it has not been seen in over 30 years. What really makes these frogs interesting is their reproductive strategy: after the male finds a mate and guards the eggs, he takes the tadpoles into his mouth and they develop (for ~2 months) in the safety of his vocal sac. The tadpoles absorb nutritious secretions from the father in order to grow (more here). 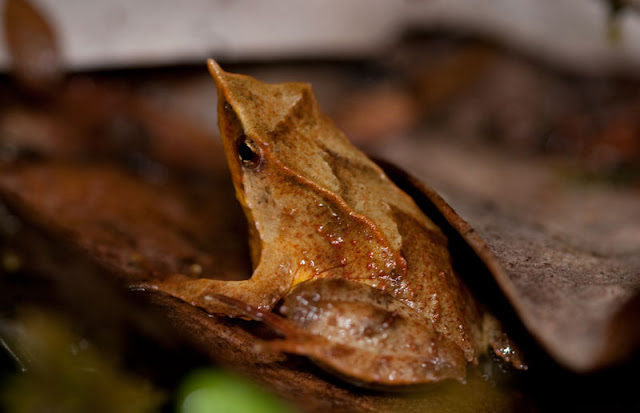 Hiking through the forests here, I hear the species on a fairly regular basis (a loud tiiii tiiii tiiii). However, even when the frog is less than a meter from you, they are maddeningly hard to find - the brown or green color fits perfectly in with the brown or green leaf litter and mosses and the small size of the frog allows it to fit in little crevices, of which there are many.

The species only inhabits patches of old-growth forest, which is disappearing on both private and public lands. However, unlike larger inhabitants, these guys don't need huge tracts of old-growth forest to survive, though perhaps in small patches inbreeding depression or a bad year could wipe out the population (speculation, of course).