I spent a lot of my second year of grad school thinking about salinity and insect herbivory. Generally, insects don't like very much salt (i.e. how many marine insects have you seen?). Salt is a fairly effective herbivore deterrent - an observation seemingly first made in 1980 by D. Newbery in an Oecologia paper on mangrove herbivory. I made the same observation, and tested it experimentally, in chenopods in a 2014 paper (also in Oecologia - they've seemingly cornered the salinity/insect herbivory market).


Plants are also affected by salt and have myriad ways to deal with it, basically all variations on either excluding it, sequestering it, or excreting it. Obviously some plants are much better at dealing with salt than others (see mangroves, Zostera, etc.) - we call plants that are adapted to saline environments "halophytes" (i.e. salt plant in Greek). I happened upon a little, weedy, nonnative, and pretty much unremarkable chenopod - Oxybasis glauca - growing at the edge of a building in Davis and somehow I decided it was a pretty cool plant. Given all the other cool halophytes available, I'm not sure why I chose this plant to do a bunch of experiments on, but I did.

Like most Atriplex and Chenopodium (the genus which Oxybasis was split from) species, Oxybasis glauca has salt bladders - little bubble like trichomes which the plant shunts salt to and then they burst, an odd but effective form of salt excretion. This leaves a layer of salt on the outside of the plant. This protects the plant from herbivory somewhat. 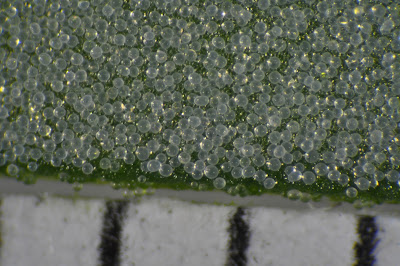 Because O. glauca is salinity-tolerant and the primary herbivore of most weedy chenopods in the valley, the spotted cucumber beetle (Diabrotica undecimpunctata), doesn't like salt (see my 2014 paper), I wondered if there might be a refuge from herbivory effect at higher salinities and maybe there would be an intermediate salinity where the plant would still grow well, but herbivores would be deterred. So I did an experiment - I grew plants in three salinities* and then exposed half of them to a week* of cucumber beetle herbivory. I expected herbivore pressure would be most intense at low salinities, but also growth would be retarded at higher salinities.

So the hypothesis looks something like this - if plant "performance" is on the y-axis and the green line is effect of herbivory and grey the effect with solely salinity, if there is some overlap, the plant might do best at that overlap point (or it might not). (note: this is not a particularly good graphical representation for a number of reasons). 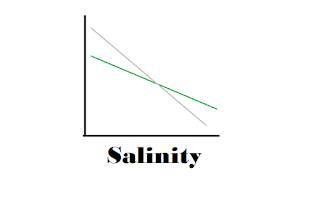 What did I find?

Plant response to salinity (w/o herbivores):

Plants did worse as salinity increased (as expected).

Total leaves damaged by the herbivores decreased with increasing salinity (as expected, as they are less palatable), but because the plants had fewer leaves, the proportion damaged increased.

Sadly, there wasn't. Beetles didn't really have an effect on biomass (or any other metric). Maybe I didn't have them in there for long enough? Maybe they really don't have a fitness effect (I can certainly believe this).

Maybe this data will be useful to someone. Email me for the sheets.

*Note: the exact procedures are in one of about 40 notebooks in my office, so I don't actually know exactly the salinities or number of days right now. If anyone is interested for any reason, I can easily dig this up.
Posted by Eric LoPresti at 1:09 PM