Columbines are toxic! Like larkspurs, columbines are supposedly toxic to most livestock and humans. So say the books. This rabbit doesn't listen to the books. (The internet, in its infinite wisdom, says that the eastern species has edible - to human - flowers, so maybe the rabbit is just rather tech-savvy)


I actually suspect that the roots and leaves may be somewhat toxic but the reproductive parts, including the flowers and pedicels (which the same rabbit eats in the next video!), are not. Deer also eat them, especially in one particular population, which I've mostly stopped using for experiments because of it. Wild speculation aside, just thought I'd share the video as I got a kick out of it.

Also, a question - is this a brush rabbit (Sylvilagus bachmani), a European rabbit (Oryctolagus cuniculus) or a black-tailed jackrabbit (Lepus californicus)? . A terrible still of the tail from the video is below. I feel a bit silly that I can't even conclusively get it to genus. I'd be kicking myself pretty seriously if I couldn't get a dragonfly, bird, wildflowers, or butterfly to genus and really this should be far easier! 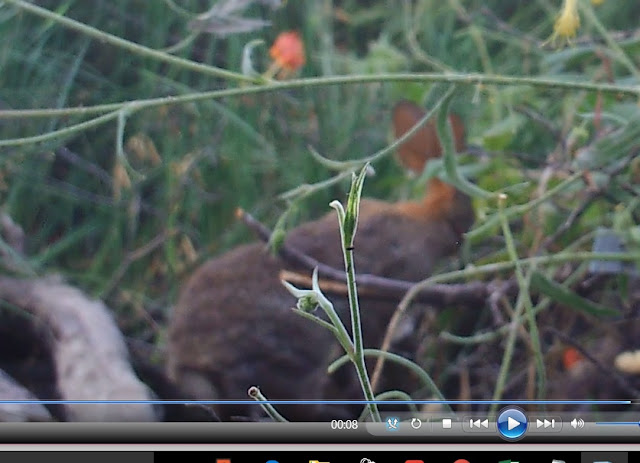 Posted by Eric LoPresti at 9:53 PM